Some shows really have more meaning than the writers intended for members of the audience who may have their own memories associated with them. For example, West Side Story was the first show I ever saw on the West End, The Car Man was my first introduction to dance as an entertainment form in its own right and there other examples. However for memory associations, little comes close to La Cage Aux Folles so you can imagine how happy I was to hear that a new production is currently doing a UK tour and I was lucky enough to catch up with the show as it touched down at the New Wimbledon Theatre.
La Cage Aux Folles tells the story of Georges (Adrian Zmed) the owner and Master of Ceremonies of a drag nightclub in St Tropez. The star of the twice-nightly show is George’s partner Albin (John Partridge) who performs as Zaza, when Stage Manager Francis (Jon De Ville) can get her over her tantrums and artistic temperament. The two of them have been together for over twenty years and, owing to a youthful bit of experimenting by Georges, have a son called Jean-Michel (Dougie Carter). Throughout his life, Albin has been a mother to Jean-Michel, unlike his birth mother who has been pretty much absent, and the family – along with their butler/maid Jacob (Samson Ajewole) – is known and respected in the area, especially at the local restaurant, Chez Jacqueline, run by their good friend Jacqueline (Marti Webb). However, things are about to change as Jean-Michel has fallen in love with Anne Dindon (Alexandra Robinson). Anne’s parents could not be more unlike Georges and Albin if they tried. Her father, Edouard Dindon (Paul F Monaghan) is a politician and head of the “Tradition, Family and Morality Party”, whose stated goal is to close the local drag clubs. He, along with his wife Marie (Su Douglas) wish to meet Jean-Michel’s father and mother before agreeing to the marriage. Seeing how in love Jean-Michel is, Georges agrees to get hold of his birth mother and hide all trace of his homosexuality, including his life partner Albin, for the night to impress the Dindons, a plan fraught with potential disaster from start to finish.
When first performed back in 1983, La Cage Aux Folles won six Tony Awards, the 2005 Broadway revival won a further two and the 2010 revival added a further three to the already groaning trophy cabinet and it’s easy to see why. There is something about this show that doesn’t date and manages to grab a new audience every time it’s put on. Possibly it is the simplicity of Harvey Fierstein’s story, which is basically about love and the lengths people will go to in order to look after those they feel strongest about. Jean-Michel turning his back on his family for Anne, Georges and Albin being prepared to make huge sacrifices for their son and Anne, ready to defy her father for the man she loves. Then there are the songs. When Jerry Herman started writing the music for La Cage I imagine he had no idea that one song would become an anthem not only for a generation but for all time. That song was “I Am What I Am” and the lyrics are so special speaking to every person hearing it and reminding them that they should be proud to be themselves no matter if others disapprove. A simple three verse song that has such a huge message behind it. 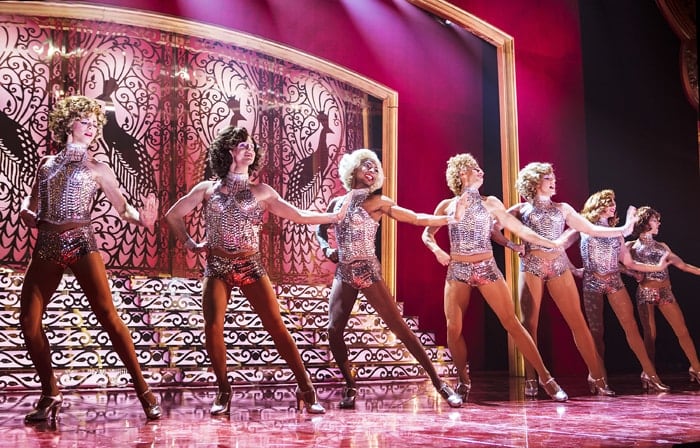 Moving to this production and both my companion and I were absolutely blown away by the amazing set and costumes that Designer Gary McCann has put together. Forget touring production, this is West End quality and it really helps bring the story to life. Director Martin Connor, really understands that in order for La Cage to work, the opening number with Les Cagelles (Richard Leavey, Matthew Ives, Louie-George Daniels, Jordan Livesey, Micah Holmes, Liam Paul Jennings and Luke Byrne) sets the tone for the whole production and this production did it in fantastic style, with the set and costume matched with superb dancing – Choreographer Bill Deamer – creating the perfect atmosphere for the rest of the show. After the opening, the next important thing is the relationship between Georges and Albin. Again, this is superb with both Adrian and John exhibiting great chemistry with each other and the story they are telling. John as Zaza is an absolute revelation and her interaction with the audience – a mix of script and clever ad-libbing – perfectly reflects the way that a drag queen can say anything she pleases and gets away with it because she is a man in a dress – no I’ve never understood how that works either but I’m not going to fight it as an idea. With the two leads being so amazing, it could be easy to overlook the rest of the cast but you would do so at your peril as everyone, whether a main character or – as Zaza puts it – a mute is equally fantastic. Special mention has to go to Samson Ajewole who pulls off a brilliant, almost play stealing performance as Jacob. Finally on the acting front, special credit to Dougie Carter as Jean-Michel who somehow manages to keep the audience on his side even as he tries to break his parents’ hearts.
Summing up then. I think it’s fairly obvious that both my companion – who hadn’t seen it before – and I thoroughly enjoyed La Cage Aux Folles. The story is universal in its themes and the songs are instantly memorable – unlike so many musicals these days – and with real meaning in their words. The tour continues until August and then hopefully someone will decide it’s time for another West End revival of this awesome show. 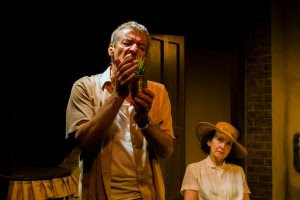 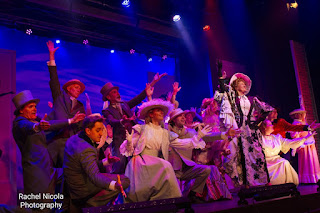 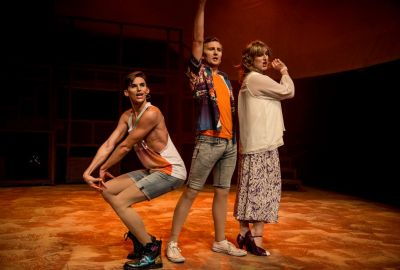